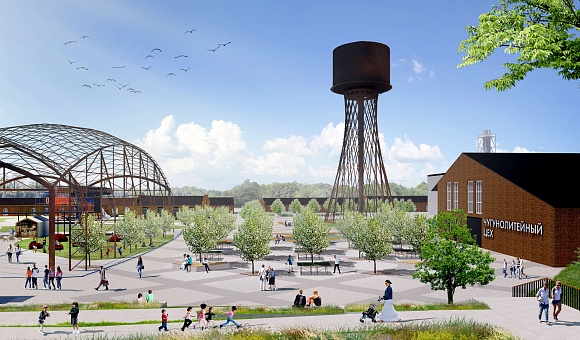 Download this photo in high resolution
The Vyksa Municipal District in the Nizhniy Novgorod Region has obtained a grant in the amount of 90 million rubles to help lay out the grounds of a future industrial tourist park called Batashev. The grant was awarded based on the outcomes of a national competition for the best project to create a comfortable urban environment in small towns and historic townships.

The project was started by the United Metallurgical Company (AO OMK, Moscow) and supported by Rostourism, the Vyksa Municipal Executive, the Government of the Nizhniy Novgorod Region, and Governor Gleb Nikitin personally.

The Batashev industrial tourist park will be located at the former site of the historical Vyksa Steel Works (AO VSW, an OMK subsidiary) cast iron foundry. The plan is for the site to host a state-of-the-art museum complex, a park for large industrial heritage exhibits, an educational Quantorium center for children, public workshops for crafts, landscaped family recreation areas. The park will also serve as a repository for federal cultural heritage items, including the water tower and the roof arches of the plate mill designed by engineer Vladimir Shukhov.

The concept for the park was developed by the leading Russian studios WowHaus and KB23 with OMK's financial backing. The MARCH Lab and Project Group 8 were also involved. The project is without precedent in Russia and is expected to become the country's principal regional center for the conservation of industrial heritage as well as an example of a re-development of an industrial site as a cultural one in a downtown location.

The opening of the Batashev Park in Vyksa is scheduled for 2023. The OMK project targets continued cultural development and the expansion of a comfortable urban environment in the town of Vyksa. Thanks to unique items of cultural heritage, the 260-year history, the original tone of the open-hearth facility and the iron foundry in combination with existing tourist itineraries to VSW's state-of-the-art production workshops and the art objects from the Art-Ovrag Festival, Vyksa will be re-thought as a unique location for industrial, cultural, and event tourism in Russia.