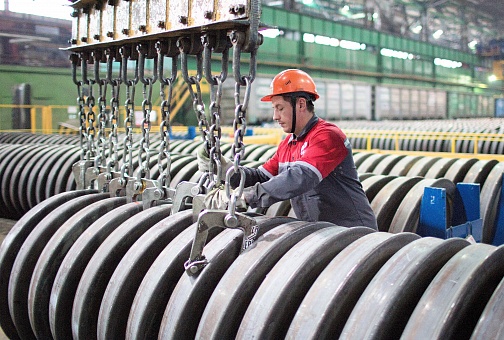 Download this photo in high resolution
Vyksa Steel Works (AO VSW, Nizhniy Novgorod Region, a United Metallurgical Company (AO OMK, Moscow) subsidiary) increased train wheel production in 2019. At the end of the year, the total number of wheels produced was 951,000 which is up 11% with respect to 2018 (860,000). This is the highest number yet in the facility’s train wheel rolling history.

This high performance is evidence that the United Metallurgical Company is doing the right things to meet the high demand from domestic customers, including AO RZD.

Exports were at an all-time low in 2019. In particular, sales outside the Newly Independent States were a third of their 2018 levels. The share of export contracts in OMK's portfolio is about 1.5% at this time. If one were to make a comparison with the time of low domestic demand and low utilization of VSW's wheel rolling facility in 2015 through 2017, the 2019 exports amounted to as little as a fifth of their former values.

"OMK is maintaining leadership in the domestic train wheel market. In a high-demand environment, the facility is capable of supplying our customers with as much product as they need while invariably maintaining high quality. This has been made possible, among other things, by the large-scale program to develop production capabilities being undertaken at Vyksa Steel Works", noted VSW Managing Director Alexander Barykov.