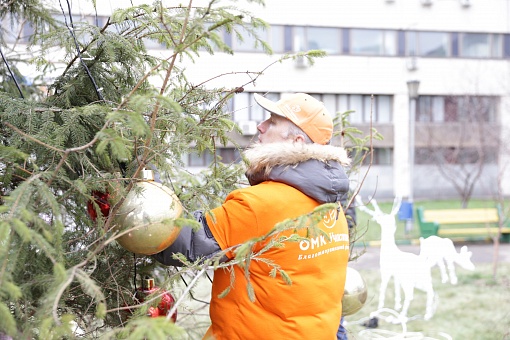 Download this photo in high resolution
United Metallurgical Company (AO OMK, Moscow) employees participated in the regular Donate a Christmas Tree charity event sponsored by the OMK-Uchastiye Foundation for the benefit of children who are patients at the N. N. Blokhin National Cancer Center in Moscow.

The week-long event commenced on December 6, 2019 with a charity book fair at OMK's Moscow offices. The funds raised were used by the Foundation to procure decorations and consumables for the cancer center. OMK employees also collected a lot of hygiene and care items for the patients.

The following day, over 50 volunteers - OMK employees and MISiS and MGIMO students - attempted to share some holiday spirit with the young patients and give them the sense of a real celebration. They decorated a large Christmas tree for them as well as the hospital yard and rooms and held a special master class asking the children to build a dream house.

Between December 9 and 13, the OMK-Uchastiye Foundation continued the event by bringing the performers of the Vedogon Theater to perform for the children a musical rendition of the Little Prince as well as the Ye. A. Kamburova Musical Theater (Moscow) with their show "On the Other Side if the Rainbow" for the youngest audience. Sergey Nebotov from the Novoe Architectural Studio held a lecture for the children on popular architecture.

"Children that are in hospitals for various reasons this time of year are not always able to attend holiday performances, partake in the festive spirit, and acquire the belief that miracles are possible. And the Donate a Christmas Tree event was invented to prevent specific situations from robbing children of their childhood, to make them always laugh and smile during the magical holiday season. We thank both the volunteers and our partners very much for supporting the cancer center's little patients during this time", said OMK Uchastiye Charity Foundation General Manager Marina Mikhailenko.

The Donate a Christmas Tree has been an annual event sponsored by the OMK Uchastiye Foundation for the benefit of the children being treated at the cancer center since 2012. Every year, the project is enhanced and expanded with new partners and volunteers joining all the time. For several years now, the event is being co-sponsored by the United Energy Company, Metal Supply and Sales Publishers, Mann, Ivanov & Ferber Publishers, and Arteza.