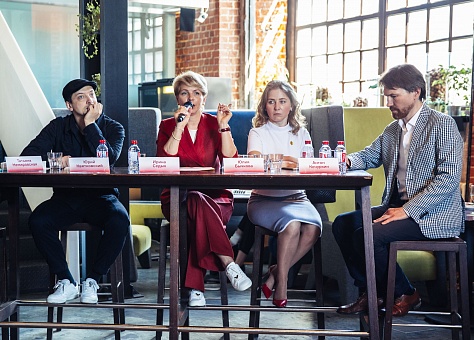 A program has been announced for the 9th Annual Art-Ovrag Festival that has been an event in Vyksa, Nizhniy Novgorod Region, since 2011. The Festival will be held between June 14 and 16 and will

focus on the motif “When today turns into tomorrow”.

The event was designed and sponsored by the United Metallurgical Company (AO OMK, Moscow) and co-sponsored by the OMK-Uchastiye Charity Foundation as well as Vyksa Municipal Government. Festival oversight is being handled by the 8 Lines Design Team.

The Festival program will include the inauguration of Russia's first industrial street art park at the site of the existing Vyksa Steel Works. The park's first objet d’art is the world's largest mural. It was authored by artist Misha Most. This year, an item from Moscow artist Alexey Luka will be added to the park. It is expected that a new objet d’art will be added to the facility collection every year. Each mural will follow the style of an art trend prevalent in the 20th century.

The festival’s music program will feature one of the most popular Russian hip-hop artists of a new wave rapper Feduk as its principal attraction.

Another important festival event will include the opening of a pavilion in the town park to be built based on a design from the Novoe architectural studio. The pavilion will follow the canons of parametric design in architecture globally acclaimed thanks to the work by Zaha Hadid and will become one of the few examples of this type of architecture in Russia.

Guests can look forward to an extensive theater program, including a lab and subsequent readings of plays by famous playwrights Evgeny Kazachkov and Mikhail Durnenkov, the King of Poets hip-hop show, and a performance by the AXE Engineering Theater entitled “Foam of the Days". The theater program will be overseen by director Yuri Kviatkovskiy.

One of the town’s ravines will be filled with ambient music from music impressionists from different parts of the country whereas Vyksa’s main square will host an interactive installation from Gogol Center artist and production designer Maria Kechayeva.

OMK-Uchastiye Charity Supervisory Board Chair Irina Sedykh: “In the 9 years, the Art-Ovrag Festival has become a seminal cultural event for this country. It is being written about, people want to come and become involved, and it has become an object of study for lessons learned. People come to the festival to look at works by the best contemporary artists and to see the way a culture project can change the look of an entire town. This year, the festival's guests can look forward to a busy program: it will include theater, music, sports, and the opening of new architectural works. It is important to us to see Vyksa’s residents expand their global horizons by participating in Art-Ovrag. This is especially important for young people. Therefore, we focus on developing the most promising parts of young culture, such as sports, rap, street art.”

Art-Ovrag Producer Yulia Bychkova: “This year, analyzing local contexts is still important for us as is engaging with the local residents to develop the festival program. The Parallel Program launched last year will be featured very prominently this year: the Binary Watch project by local artist Andrey Matchin will produce one of the town’s important interactive objets d’art. And Vladimir Selezniov will oversee a show called “Things that cannot be” involving 13 local artists. This high-quality use of the local environment in the festival program shows local creative potential to advantage and may possibly give rise to a local Vyksa art form.”

Art-Ovrag Manager Anton Kochurkin: “This year's Art-Ovrag is focusing on representing the future. Urban spaces are used to host concepts translating the various strata of the future of the town, including a helicoidally shaped pavilion, a sculpture in the shape of a clock connected to Vyksa’s Internet community, mock-ups of future art backyards and those already built, and the incredible street art at an existing manufacturing facility and works by local artists breaking into the local museum. This is all a record of the change that has been initiated in the town of Vyksa.

The Art Ovrag Festival is the only culture project in Russia to develop an entire city. In the festival's 9 years, Vyksa has become home to over 85 works of street art and public objets d’art, including a light sculpture entitled “None of this is a dream” by Timofey Radia named by Forbes one of Russia’s most promising artists and works by “Russian Banksy” Pasha 183 as well as by artists from France, Germany, the US, Hungary, Italy, Scotland.

A monocity of 50,000 residents boasts its own artist residence (VYKSA AIR) which has already been visited by 25 artists from all over the world. Vyksa residents get involved in creating art backyards, in putting up unusual bus stops (Druzhba Studio), and anyone can take a trip on a unique float on the central pond. The floats have been created by famous artists and architectural studios, including Leonid Tishkov and the Wowhaus Studio. Thanks to the festival, the town museum has been able to add to its contemporary art collection which currently includes 40 exhibits and such names as Georgy Ostretsov, Dmitri Bulnyghin, Elena Kovylina, Ilya Gaponov, Stas Buggs, Ustina Yakovleva, and others.

The opening of Russia’s first Industrial Street Art Park at VSW will become one of the festival’s pivotal events. Starting with the first festival, works of street art were created in Vyksa every year making the town a meeting location for artists from all over Russia as well as an experimentation site. The industrial street art park will become a unique collection of works from leading artists at the site of an active manufacturing facility. In 2017, the future park became the site of the world's largest mural authored by artist Misha Most. By the time the park opens, it will include a piece by one of the most progressive street artists Alexey Luka. The project is being overseen by Olga Pogasova.

The second important festival event is the construction of the Pavilion of the Future in the town park. The Pavilion will become an important public building. Its parametric design will introduce a new futuristic note into the familiar landscape and will help Vyksa’s residents make their ideas come alive by becoming a site for lectures, master classes, and movie screenings. The pavilion will be authored by the Novoe Studio whose recent portfolio of projects includes installations in Gorky Park and the backyard of the Moscow Museum. Currently, a curator competition is underway while the first events will be hosted in the pavilion at the time of the festival.

During the festival, Vyksa's central square will be turned into an improvised stage for a performance by the AXE Engineering Theater (winner of numerous awards, including the Golden Mask) called "Foam of the Days" based on a novel of the same name by French writer Boris Vian. The theater program will also include a "playwright lab" under the tutelage of Evgeny Kazachkov and Anatoly Durnenkov. Their plays have been turned into theatrical performances by many theaters, including the Theater of Nations, the Chekhov Moscow Art Theater, the Alexandrinsky Theater, the Gogol Center, Theater.doc, the Vsevolod Meyerhold Center, the Taganka Theater, and others. The lab will hold a reading of texts created as a result of a review of the local urban context. At a later date, the lab will announce that it is looking for volunteers and that it is open to everyone.

Artist and production designer Maria Kechaeva will turn the town's central square into a single installation called "A Factory of the Future" which will be a framework structure with all kinds of spinners, lights, noise makers that will be powered by bicycles available to everyone.

The vicinity of the Lebedinka Pond will host the festival's music program where the spectators will be able to immerse themselves into an ambient utopia. This will include a series of electroacoustic performances by Kymatic, Kate NV (a project by soloist GS/Glintshake), Foresteppe, Unbroken Dub, X.Y.R. Their participation in the overall audiovisual open air performance will be enabled by the Fields team, organizers of an avant-garde music festival of the same name.

Guest of the festival will attend a performance by the funk band known as the Soul Surfers and will be given an opportunity to participate in a hip-hop lab that will develop a theme tune for Vyksa and Art-Ovrag. The application process for the event will also launch somewhat later.

The festival will also include a King of Poets hip-hop battle which will combine classic poetry with the hip-hop culture. The best graduates of the Freestyle Workshop of Lev RE-pac Kiselev (founder of and instructor at Russia's first freestyle school) will step into the shoes of famous poets participating in a multi-stage contest for the title of the best of the best.

The festival’s music and hip-hop program will culminate in a performance by one of the most popular Russian hip-hop artists of a new wave rapper Feduk.

The sports program will include the fastest developing trends in the town's sports culture: workout, scateboard, BMX, and parkour. Demonstrations will be staged by top athletes, including Russian national champion and contender at the World Championships Dmitri Kuznetsov.

The Festival's public program will include a number of master classes and discussions. Curator Maria Mkrtycheva will invite artists, researchers, and activists to talk about responsible attitudes towards the environment, consumption, and manufacture of both goods and knowledge and information.

The parallel program will bring together creative projects by Vyksa's residents. The final show called "Things that cannot be" which will present the outcomes will open at the site of Vyksa's principal museum complex at the time of the festival.