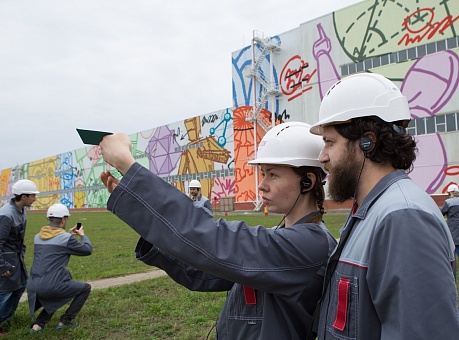 Vyksa Steel Works (AO VSW, Nizhniy Novgorod Region, a United Metallurgical Company (AO OMK, Moscow) Subsidiary) has won an award in the 2018 Itinerary of the Year National Tourist Competition whose finals were held in Ulyanovsk on November 1 and 2, 2018. The facility was awarded the second prize with its industrial tourism development project for the best itinerary to a running manufacturing facility.

A total of 460 projects from 60 regions of Russia were submitted to the competition. Vyksa Steel works became the only representative of the Nizhniy Novgorod Region to make it to the awards finals.

VSW started developing into industrial tourism in January 2018 by offering tourists itineraries through its various manufacturing facilities and art installations housed at the VSW site. In the 10 months of 2018, the facility was visited by 675 people from different parts of the country and from abroad (Mexico, Italy, the US, and Slovenia).

“VSW is the only heavy industry facility in the competition, and it is gratifying that our project has received such high grades from a national panel of judges. We will continue expanding. We expect to develop new itineraries for disabled persons, to introduce our visitors to instances of lean manufacturing and industrial health and safety tools as well as to attract large numbers of secondary school and college students from universities associated with the industry”, said AO VSW Managing Director Alexander Barykov.

“Industrial tourism is one of the most important thrusts in the industry’s development as stated in the region’s socioeconomic development strategy. The region has many facilities with a long history but Vyksa was one of the first to start thinking about using this heritage for cultural purposes. I am sure that the future holds many interesting events and new accomplishments”, said Nizhniy Novgorod Regional Governor Gleb Nikitin referring to VSW's success in the Itinerary of the Year competition.

Vyksa’s industrial heritage was part of yet another of the competition's projects. The Best River Cruise category went to a project entitled Visiting the Cast Iron Kings of Russia. This is an itinerary around those towns where Ivan and Andrey Batashev built their manufactories in the 18th century.

The Itinerary of the Year national tourist awards are distributed based on the outcomes of a national competition of projects for accomplishments in creating and developing tourist itineraries. The competition has been ongoing since 2014 and enjoys the support of the Federal Tourist Agency and the INTOURMARKET Show. The awards included two regional competitions that received 450 projects from 60 regions throughout the nation. A hundred and five projects made it to the finals. Winners were named in 17 categories.

Under the industrial tourist program, VSW offers tourists three unique itineraries focused on the manufacture of pipe in the “Russian size” that is almost 1.5 meters in diameter, train wheels, and oil and gas line pipe. Each itinerary includes a visit to the largest mural in Europe located at the facility and having an area of 10,800 square meters.

The Vyksa Municipal District itself is of great interest to visitors since it is home to 137 cultural and historical sites, including the Batashev-Shepelev Mansion (18th century), the Iversky Convent, and unique hydroengineering system of ponds, a landscape architecture and park heritage site dating back to the 18th century. In addition, Vyksa plays host to the Art-Ovrag Festival of Urban Culture every year bringing together famous artists and architects, musicians and sculptors, directors and professors, choreographers and sports people. The town’s residents become actors, dancers, cooks, sportsmen and women, and even circus performers.

In addition, the “Vyksa: Accessible!” project being undertaken by the OMK-Uchastiye Foundation is developing adapted VSW history museum tours and tourist itineraries around Vyksa Steel Works for people with disabilities.  For example, a tour in the Russian Sign Language was successfully tested this year.