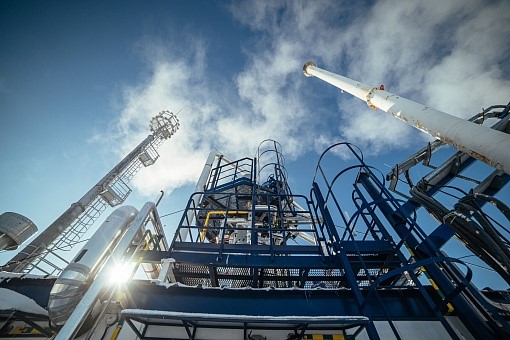 The unit enables oil companies no longer to flare crude associated gas by breaking it down as much as possible right at the field.

Once refrigerated and free of particulate and water vapor, the gas undergoes fractionation into useful components, such as natural gasoline and methane. A stripping unit will help process associated petroleum gas into up to 5,200 tons of stable gas condensate a year and reduce carbon dioxide emissions from oil and gas pre-processing installations by as much as 7%.

Dried stripped gas will be sent to the oil treatment facility power unit as motor fuel. A stripping unit enables the reintegration of components lost with associated gas back into the petroleum stream thereby increasing commercial mass flow for delivery into the pipeline by 1.5%. Stripping unit design helps increase its energy efficiency by 10%, reduce its size, and minimize hydraulic flow resistance through the unit.

The unit itself is a modular construction 9 by 12 m in size weighting 80 tons and is easily moved using trailers. It can be assembled quickly right at a field. A stripping unit works on automatic and requires minimum operator involvement. Control and monitoring are performed out of a central control room.

"The problem of recycling associated petroleum gas is one of the more urgent issues in the oil and gas sector, especially in Russia. Unfortunately, this country mostly flares its associated gas while the West has learned to turn it into fuel. Flares are a fixture at our oil fields and create serious environmental issues since flaring the associated petroleum gas produces large amounts of contaminants, such as incomplete combustion products, carbon dioxide, and sulfurous compounds. The stripping unit we have developed helps produce petroleum without discharging combustion contaminants into the air. In addition, it makes more fuel for the equipment thereby reducing the cost of producing oil. It also increases the quality of the product," noted Managing Director of OMK's Chelyabinsk facility Alexander Vashchenko.

Oilfields around the world wastefully burn 140 billion cubic meters of associated petroleum gas (APG). Russia burns a tenth of the global APG production. Whereas the US, Canada, and Norway utilize between 99 and 100% of their APG. The oil industry annually "flares" some USD 50 million.

Russia has offered support to the UN and World Bank initiative to stop flaring associated petroleum gas by 2030.