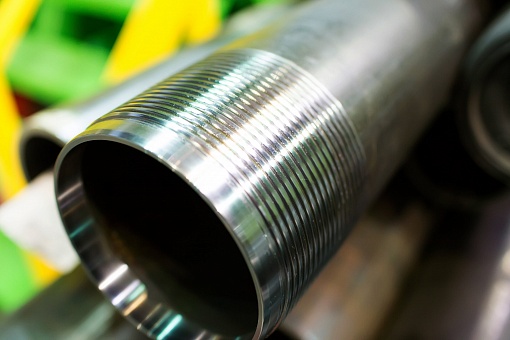 The United Metallurgical Company, being one of Russia's leading manufacturers of tubulars for the oil and gas sector, has successfully completed the testing of casing specimens with the VMZ-4 gas tight premium threaded connection per the ISO 13679 international standard. The outcome of the testing per the strictest requirements at level CAL IV** evidenced that OMK's tubulars can be used in the construction of oil and gas wells at extreme loads, including offshore oil and gas fields.

The qualification was handled by an international test lab belonging to Oil States Industries (Scotland) and witnessed by third-party inspectors.

During testing, OMK tubulars were subjected to combined loads that correspond to the most demanding service inside a well. As a result, the testing of the OMK sample tubulars was able to confirm that the thread is resistant to multiple makeups and breakdowns. The pipes maintained a seal under combination tensile, compressive, and bending loads as well as inside and outside pressure. They also maintained a gas seal when tested under the effect of mechanical and thermal cycles at a temperature of up to 180°C.

The qualification of premium tubulars per ISO 13679 is one of the key requirements of Russian and international oil and gas companies for certification for deliveries to complex on- and offshore gas and oil production projects.

"A certificate of successfully completed testing to the requirements of the highest CAL IV level guarantees OMK tubular reliability and high quality for customers with oil and gas wells. Last year, we commissioned a state-of the-art oil and gas pipe-finishing center for 120,000 tons a year in the Nizhniy Novgorod Region for tubulars with premium and semi-premium threaded connections. The qualification of our tubular product under the ISO 13679 international standard became a logical step in OMK's development strategy in the segment of threaded oil and gas tubulars (OCTG) with premium threaded connections," noted OMK Energy Business Unit General Manager Vadim Sakharniuk.

* The VMZ-4 premium threaded connection is an in-house OMK development. It is notable for a special design of the end gaskets with metal-to-metal sealing assemblies assuring leak protection of a casing string under combination tensile, compressive, and high bending loads in sloping and horizontal well shafts.

**СAL (Connection Application Level) IV is the highest level of requirements applicable to threaded connections of OCTG pipes regulated by the ISO 13679 international standard. The standard defines 4 levels of connection testing, from the least severe (CAL I) to the most stringent (CAL IV).