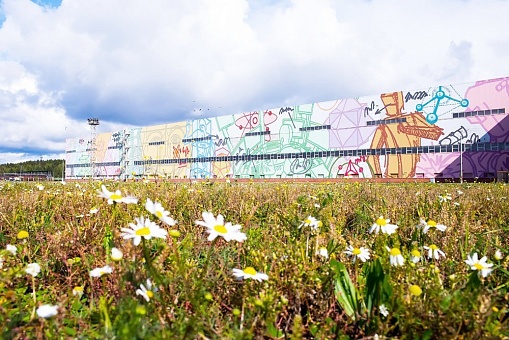 The United Metallurgical Company has been included in the fourth annual social effectiveness rankings by the AK&M Agency that comprise 45 Russian corporate leaders in sustainable development with the best environmental impact to social benefit ratio. Based on 2020 data, OMK is number 18 nationally among the largest holding companies. And same as in the previous years, OMK is number 2 in the steel industry.

Based on a report published by the AK&M rating agency, OMK has the lowest total environmental impact in the industry and is third in terms of social expenditure as a percentage of revenue.

OMK is continuously reducing the environmental footprint of its manufacturing activities. In particular, it is reducing the amount of solid waste and increasing the percentage of recycled waste and is using natural resources efficiently. In 2020 alone, the company reduced effluent discharge into bodies of water by a factor of 1.5 year-on-year by expanding its closed-circuit systems and increasing the percentage of re-circulated and re-used water. OMK is demonstrating its best results at its largest facility located in the Nizhniy Novgorod Region. In particular, virtually 100% of the water at OMK’s integrated casting and rolling facility is re-circulated.

The company is also reducing the amount of waste going to dump sites each year. Currently, OMK facilities recycle and decontaminate or deliver to specialized companies for recycling and decontamination 91% of all waste. Some of the manufacturing waste, such as steel and non-steel scrap, lime, dolomite, waste lubricants, waste wood, polyethylene containers, etc., were sold by the company in 2020 for RUB 132.5 million as by-products for subsequent re-cycling or re-use in the economy. The best performance was demonstrated by OMK’s Chusovoy facility in the Perm territory: the amount of waste sold for re-use, mostly in the form of steel slag, was increased by a factor of 6.5 with respect to 2019.

This year, AK&M has enhanced its rating with a separate grade for the companies’ societal responsibility. It is based on ranking the best companies by social expenditure (wages paid, taxes, and charity) as a percentage of revenue. As far as this performance metric is concerned, OMK placed third in the steel industry with 24% of its revenue going to social expenditure. In 2020, the Company allocated over 1 billion rubles to help develop the areas hosting OMK facilities. In addition to systemic projects, such as the Start Your Own Business program to support social businesses and the OMK Partnership competition for grants among charity projects as well as projects to develop the urban environment and support for art and culture, OMK assisted in combating the pandemic. The Company allocated over 150 million rubles for this purpose supporting medical facilities and residents in areas that host its plants.

OMK is reducing its environmental footprint by using mature nature preservation and energy efficient technologies as per the national sustainable development priorities and international objectives. The Company’s best practices are being successfully transplanted to new facilities, such as the OMK Steel Track railway car maintenance company and the Belenergomash facility in Belgorod. We focus especially on dust suppression and fume treatment equipment to reduce atmospheric emissions. We continue reducing effluent discharge into the environment and increasing the share of re-circulated and re-used effluent. In 2020, we allocated over 1.1 billion rubles for the purpose. We help create a comfortable urban environment in areas that are home to our employees and their families. Vyksa in the Nizhniy Novgorod Region is an excellent example of a partnership between businesses, the authorities, and the residents. It has been named among the top 10 monocities in the country on multiple occasions. This is where we are developing industrial tourism and helping resolve social issues, building Russia’s first industrial tourist park (Shukhov Park), supporting the Vyksa - Art-Ovrag contemporary culture festival that OMK-Uchastiye has been holding annually for over 10 years,” noted OMK President Natalya Eremina.

*An assessment of social responsibility is based on ranking the best companies by social expenditure (wages paid, taxes, and charity) as a percentage of revenue.

A social effectiveness rating is a ranked list of companies based on an evaluation of the companies’ social effectiveness. It was computed based on two types of metrics:
─ the social impact of the business (amount paid into the treasury, environmental protection expenditures, payments to employees based on the employee engagement factor);
─ the environmental impact (amount of pollutants discharged into the air and the water, solid waste adjusted for the effect of toxicity).

The computation produces a social effectiveness metric (as the ratio of the social to the environmental impact).

AK&M has been publishing this metric since 2018. The objective of the rating is to showcase the companies that bring great benefit to the community with minimum impact to the environment and find a balance between facilities’ environmental impact and the benefits they create for the public at large.

The 2020 rating can be found at the agency website.