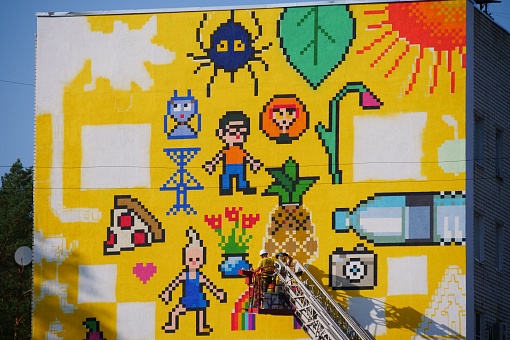 A building in Vyksa, Nizhniy Novgorod Region, has become a canvas for a mural called Smiley, the original sketch for which had been painted by children. The new wall painting with an area exceeding 200 square meters is the first piece of art painted by a child that has been added to Vyksa’s street art collection.

A sketch for the mural had been painted by 13 children from Vyksa aged between 6 and 14 at their classes at the Vyksa Art Residence as part of a social event sponsored by the OMK-Uchastiye Charity Foundation (established by managers and employees with the United Metallurgical Company). The children were assisted in making the painting by Vyksa’s street art park project designer and curator Olga Pogassova and experienced art instructor as well as one of Russia’s original web designers Natalya Struchkova.

Before getting down to work, the children spent a few days strolling around Vyksa looking for round and triangular objects. These became the models for the components of the future mural: the round belly of a Vyksa resident of respectable age at a store, the triangular chin of a worker at a bus stop, an earring in a young girl's ear, a car wheel, an iris, and even an old street light pole. This practice of expanding perception, observation, and transformation of one’s everyday are routed in the avant-garde and the expanded vision practices of famous early 20-th century Russian artist Mikhail Matyushin.

Artist Natalya Struchkova integrated the children's drawings into a collage presenting a single arrangement in her characteristic pixellated style. The Smiley mural went up on the wall of No. 13 in Vyksa’s Zhukovsky neighborhood. The same wall had previously been decorated with the Guitarist image placed there by Siberian artist Vassily Kaptyrev in 2013 during an Art-Ovrag festival. In the summer of 2021, his art was covered up in thermal insulation during building renovations. The new mural was applied to the building wall by Sergey Ovseykin and Ivan Maximov from Moscow. The municipal district executive assigned a man lift vehicle to the job.

“A new mural goes up in Vyksa every year. Last year, it was the fresco of record-breaking size by Eric Bulatov, a titan of Soviet conceptualism. This year, an idea developed to involve children in making a mural. The idea has several important components: using the initially “naive” and non-expressionist street art background, and for the kids, an opportunity to get ahead in art quickly. At the same time, we wanted to show Vyksa residents a mural that is a piece of art created by people they know based on Vyksa’s cultural context”, recounts project initiator Olga Pogassova.

“The Smiley mural is an excellent example of participatory design, which is what we are looking for in our activities in Vyksa. The project involved famous artists and children from Vyksa. They became engaged in the creative and the instructional processes at the Vyksa art residence. Support for the mural also came from the town executive and residents. The outcome of this collaboration is a new attractive place of interest for the town,” noted OMK-Uchastiye Charity Foundation General Manager Yuliya Mishina.

The “children's” wall is to be unveiled at 3:30 pm on August 29. Guests will be treated to a performance by Ludmilla Petrushevskaya called “Piotr the Piglet's Cabaret”, fairy tales, games, songs, and a master class in “diplomatic vandalism” from Natalya Struchkova.

Olga Pogassova, Moscow, Project Curator. Curator and producer of culture projects in Russia and internationally. Since 2019, curator of the Industrial Street Art Park at Vyksa Steel Works. Frequently turns to participatory design and collaboration with the local communities in her projects.

Natalya Struchkova, Moscow, Artist. A graduate of the Moscow Institute of Architecture, participant in many Moscow Biennale Festivals. Her art is on display at the Tretyakov Gallery, the Hermitage, the Garage, the Hiroshima City Museum of Contemporary Art (Japan), the BALTIC Center for Contemporary Art (Great Britain). In her art, Natalya interprets the way the current environment is created through information flow and advanced technology. In her paintings, she re-creates recognizable scenes and landscapes in LEGO bricks. The Lego system becomes a metaphor for the world with all the materials and objects replaced with plastic bricks.

Vyksa | Art-Ovrag is a contemporary culture festival that Vyksa has been hosting since 2011. The festival is co-sponsored by the OMK-Uchastiye Foundation and the United Metallurgical Company (AO OMK). In 2020, new festival production manager Fedor Pavlov-Andreyevich introduced the concept of a town-wide festival culminating in July, August, and September. The Vyksa Festival being created by and for the residents together with outstanding cultural personalities from around the world is based on multicultural values. It helps build new urban communities and support existing town initiatives.

The Vyksa Art Residence opened its doors in 2017 under the patronage of the OMK-Uchastiye Charity Foundation. It is a year-round platform for culture professionals that helps residents implement projects and do research in and around Vyksa. It is the Residence’s objective to support contemporary artists without any restrictions based on age, genre, or country of residence. In 3 years, it has hosted over 40 artists including Haim Sokol, SASHAPASHA, Tatyana Efrussi, Dmitri Morozov, Vtol, Ikuru Kuwadjima, Kirill Makarov, Ustina Yakovleva, Ivan Gorshkov, Dmitri Bulnygin, Elena Kovylina, Vikoria Begalskaya, and others.