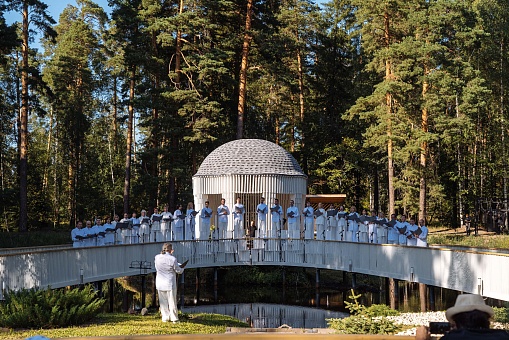 The first weekend of the 10-th anniversary Vyksa Art-Ovrag Festival was hosted in the Nizhniy Novgorod region on August 27 through 29 and presented to the general public the fruits of a creative collaboration between Russian and foreign artists, musicians, and directors and the monotown of Vyksa and its residents. This opportunity for self expression was provided for the Vyksa residents by the festival’s organizers: the OMK-Uchastiye Charity Foundation and the United Metallurgical Company (OMK).

The residents formed creative partnerships with famous photographic chronicler of ordinary life Dmitri Markov, doyen of contemporary academic music Vladimir Martynov, young composer Dmitri Bazhenov, director Andrey Manik, actor and director Alina Nassibullina, author Ludmilla Petrushevskaya*, actresses Irina Pegova and Rosa Khairullina, the Zenta Sventana and AIGEL groups, journalist Marie Armas, and many others. The weekend program that opened the town-wide festival offered its audiences a number of world premieres, such as the Trioratorio** musical and spatial performance, the Karamzin: Village Theater*** immersion show, and Empty Pedestal**** by Charles Renfro. Residents and the festival’s guests were also able to participate in three promenade shows that helped showcase Vyksa from a new angle: not only via its history and historical locations but also via the local residents, local cuisine, and the history of Vyksa's ponds. In addition, the festival delighted with the first showing of a show called “He is in Argentina” and the unveiling of the town's first mural painted from children’s drawings, Dmitri Markov's and Ludmilla Petrushevskaya’s shows, and a first showing of a joint track by Zventa Sventana and AIGEL.

Vyksa residents were involved in preparing the festival’s events. The Upsala Circus show from St. Petersburg, for instance, featured 40 Vyksa residents as performers, including people that are into sports, bikes, street racers, smiths, rap musicians, and members of a veterans’ choir. In their show, they brought together acrobatics, kick scooters, BMX moves, autotuning, musical sequences, and break dance.

The Vyksa Art-Ovrag sports program included both events that the town residents are used to, such as BMX and skate boarding and some new projects and disciplines, such as SUP boarding and kick scooter. The first weekend program was all about introducing the town’s residents to all the popular aspects of the SUP culture: from yoga and SUP board racing to an SUP expedition around Vyksa’s ponds. One of the festival program’s central events was a large-scale race along the parkrun trail recently opened in Vyksa. For all skateboard, BMX, and kick scooter fans, professional races, master classes, and direct communication sessions with athletes were held.

It is important, that this year, the Vyksa Art-Ovrag program had inclusive events, i. e. events accessible to guests with disabilities, including children. These were the local history promenade show, circus and theater performances, music events, and a children’s program. Thanks to an OMK-Uchastiye Foundation project to provide socialization opportunities for disabled persons called Vyksa:Accessible, a special place on the festival program was reserved for events with audio descriptions and interpretation into the Russian Sign Language.

“Both Vyksa residents and people from out of town were surprised with this festival. The residents, with the fact that it was their talents being used as a corner stone. Guests, with Vyksa itself as a where first-class contemporary culture is being made. Surprise is very important energy. These three days, the town was filled with a sensation of drive, merriment, and bonding. Most of the people I met were concerned with not having enough time to see some of the events on the program. This is exactly the feeling my team and I wanted to create in the festival’s guests,” related Vyksa Festival Director Fedor Pavlov-Andreyevich.

“This year’s program is built on collaboration between Vyksa residents and the brightest personalities of contemporary culture creating opportunities for creativity and education. In Vyksa, we are creating a community of residents that change the town for the better together with us,” noted the festival’s creator Irina Sedykh, Chair of the OMK-Uchastiye Foundation supervisory council.

The festival’s second weekend is scheduled for September 24 through 26, 2021. All the program updates are immediately posted to the festival’s website. Festival passes are also available for purchase on the website.

*Ludmilla Petrushevskaya’s Season in Vyksa The residency of living classic of contemporary literature Ludmilla Petrushevskaya resulted in shows called “He is in Argentina” and “Karamzin: Village Theater”, a water color studio called Rose Mania, Piotr the Piglet’s Cabaret, and a gibberish show called “Five days till tomorrow” where Vyksa residents and guests of the festival saw illustrations to Petrushevskaya’s famous linguistic fairy tales called “Pusky Biatiye”, and original comic strips about a dog called Zamurzik and its family, Akhineya’s announcements as well as a pictorial poem called “Poh, Lih, Boh, and Quey”.

** Trioratorio
The musical and spatial project is a performance by several choirs, such as Major Vyksa choir reconstituted for the festival, Evgeny Skurat’s Chronos of Moscow, and Vyksa Children's Choir.

Each of the three oratorios was created under the impression of an architectural object. The first piece is the motet called Nuper rosarum flores by medieval French composer Guillaume DuFay written for the solemn consecration ceremony of the cathedral of Santa Maria del Fiore in Florence. The second oratorio without a name was created by Russian classic Vladimir Martynovsky as a response to DyFay and inspired by impressions of the Shukhov Tower. The third work is a piece called “De Comprehensibili”. It was written by composer and mathematician Dmitri Bazhenov. It is related to the composer’s impressions from drawings by architect Charles Renfro for his Empty Pedestal piece built specifically for the festival in Vyksa’s Red Square.

The a capella singing of the Vyksa Choir was complemented by idiophones, rare instruments made from steel manufactured at OMK’s Vyksa facility under the direction of contemporary music researcher Piotr Aydu. He made the plant’s metal voice heard through acoustic instruments manufactured specifically for that purpose.

Trioratorio’s production designer and director was Katya Bochavar. Andrey Kotov was the choir conductor, and the original idea was developed by musical historian Xenia Anufriyeva.

*** Karamzin: Village Theater (an Immersion Show)
A show based on Karamzin: Village Diary, a novel by Ludmilla Petrushevskaya. It was directed by Brusnikin’s Workshop graduate Alina Nassibullina and Dmitri Krymov’s Workshop graduate Anya Grebennikova who invited teenagers from Vyksa into the cast, including charges from the social rehabilitation center for minors. The audience also became directly involved in the performance. The location and the protagonist is the community center in the Township of Doschatoye built in 1953. A neoclassical legend and a charismatic building where fates were changed and lives were saved.

**** Unveling of Charles Renfro’s Empty Pedestal.
At the invitation of the Vyksa Festival, world architectural guru Charles Renfro installed his Empty Pedestal in Vyksa’s Red square. His project is a starting point for a series of residencies by artists from around the globe. Renfro took his inspiration from the heritage of Vladimir Shukhov who also designed the first Russian oil pipelines. That is why the pedestal has the appearance of an unrolled steel pipe. The pedestal was designed and manufactured with assistance from employees of OMK’s Vyksa facility.

The unveiling of the Empty Pedestal proceeded to the accompaniment of Vyksa’s combined children's choir singing a piece by young composer Dmitri Bazhenov written based on drawings for Charles Renfro’s Empty Pedestal.