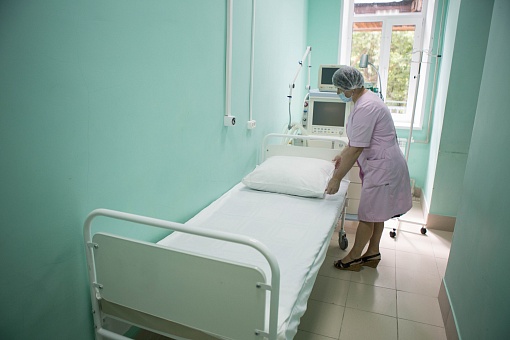 During the time of the pandemic, the United Metallurgical Company (AO OMK, Moscow) has given over 10,000,000 rubles in aid to the Central District Hospital of the Vyksa Municipal District, Nizhniy Novgorod Region. This district is home to the Company’s largest manufacturing facility (AO Vyksa Steel Works).

The amount of 6,000,000 rubles was allocated for repairs to the infectious disease ward. This funding was used to effect capital repairs in the building: the existing structures were replaced and reinforced, electrical wiring, running water, sewage, and heating were upgraded. The walls were equipped with additional thermal insulation, windows, doors, and plumbing fixtures were replaced, fire alarms installed. Because of this, Vyksa residents diagnosed with the corona virus, respiratory viral infections, and community-acquired pneumonia are able to receive care at a comfortable facility in their hometown.

Previously, OMK delivered a LEON PLUS ventilator to the hospital as well as three disinfection gates filled with an antiseptic spray. The Company also purchases personal protective gear, such as masks, gloves, respirators, overalls, and sanitizers, for Vyksa District Hospital employees.

“We are very thankful to OMK and Vyksa Steel Works management for the aid and for the real support we are being given in our hour of need. Personal protective gear was delivered in a timely manner as part of free aid. This assures maximum safety for medical personnel finding themselves at the forefront of the fight against the corona virus infection, safeguards personnel health, and prevents the spread of the virus. The worst thing for the patients is when the people that are supposed to be treating others find themselves on a hospital bed. We were able to protect the team from that and concentrate all efforts on fighting for people’s health,” emphasized Vyksa Central Hospital Chief of Medicine Anastassia Sokolova.

In addition, OMK systematically aids Vyksa’s social institutions. Thus, in December the Company purchased five recirculators for the Pelikan Social Rehabilitation Center for the Underage as well as 1000 liters of sanitizer for the House of Charity.

In 2020, OMK earmarked 150 million rubles as aid to medical institutions and residents in areas that are home to its facilities. In the spring, it delivered 55 ventilators and over 1,000,000 pieces of personal protective gear to hospitals in the Nizhniy Novgorod Region.

OMK sponsored a remodeling of the infectious disease ward at the Kulebaki Central District Hospital.

OMK and the OMK-Uchastiye Charity Foundation partnered with the Vyksa Municipal District Executive and the Vyksa Diocese to help residents of the Vyksa Municipal District finding themselves in difficult circumstances during lockdown. Company funds are being used to purchase food care packages for Vyksa's orphaned seniors and low-income families. The Company and the Foundation have offered support to the Vyksa volunteer center operating as part of the #Together national self-help drive. New shipments of personal protective gear are being delivered to the volunteer center to assure its continuity.