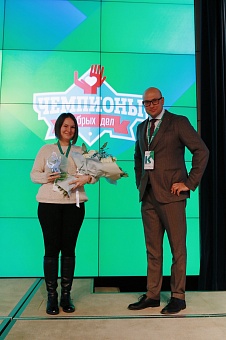 United Metallurgical Company (AO OMK, Moscow) Social Responsibility Lead Olga Mironova spoke to an online seminar on how to talk about volunteer programs to large audiences which was part of the XI-th Moscow International Forum on Corporate Volunteerism in Business and Society.

The participants discussed contemporary approaches and formats of publicizing volunteer initiatives in the media and shared experiences of promoting the corporate volunteerism cause, including experiences during the pandemic.

OMK has been expanding its volunteer activities for many years already. The Company has “regular” volunteers running their own projects as part of the OMK-Partnership Competition, involving their friends and family. And it has “event” volunteers, i. e. those that join volunteer events initiated by the Councils of Young Metallurgists, local non-profits, and the OMK-Uchastiye Charity Foundation. Olga Mironova spoke about OMK's practices in publicizing these initiatives. The Company regularly hosts meetings between reporters and project initiators and beneficiaries, organizes press visits.

“Smart media coverage of volunteerism helps create an attractive image of volunteer activities. People must realize that anyone can become a volunteer. It is interesting, trendy, and prestigious. It is important for the journalists to see that there is a personality behind every social project whose story can and must be told”, noted OMK Social Responsibility Lead Olga Mironova.

The forum also hosted a discussion on technology and innovation in developing corporate volunteerism. At the discussion, My Russia Project General Manager Vladimir Kharchenko talked about the launch of an online platform for the OMK-Partnership Competition that was used this year to submit competition applications. It is important that the contest application form is identical to that of the Presidential Grant Foundation competition which makes raising additional funds for initiatives easier for the participants.

The outcomes of the Champions of Good Deeds national corporate volunteerism competition were also announced at the forum. The Environment category was won by volunteers from the Trubodetal Facility (AO Trubodetal, Chelyabinsk). In mid-August, they collected some 30 bags of trash on the banks of the Ay River in the vicinity of the Ay Valley Camping site (Satka District). The environmental event took place thanks to the support of the OMK-Partnership Competition of Social Business Initiatives which the United Metallurgical Company was sponsoring for the 6th year in a row. Despite the heavy rain, 20 volunteers cleaned about 2 km of the river bank. Facility employees have been holding similar environmental events in popular tourist locations for several years now. Last year, facility executives arranged for trash collection at the Taganay National Park while volunteers gathered trash on the banks of Lake Ziuratkul.