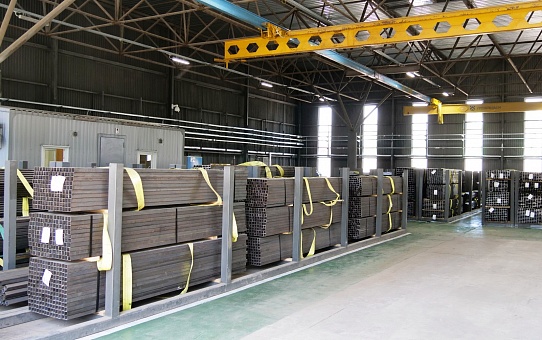 The United Metallurgical Company (AO OMK, Moscow) opens an in-house distribution network for tubulars, flat goods, and longs for small and medium-sized customers in the Russian regional markets. The distribution function has been separated out into a new company within the OMK Group called OMK Market (AO OMK Market).

This was explained by OMK Market General Manager Roman Rybalov at the 10-th National Conference entitled "Steel Tubulars: Manufacture and Regional Sales" launched in the Moscow Region on August 13.

OMK purchases tubulars and flat goods from OMK facilities (Vyksa Steel Works in the Nizhniy Novgorod Region and the Almetyevsk Pipe Mill in the Republic of Tatarstan) as well as from third-party manufacturers under the same conditions as other market players and puts together orders for small and medium-sized customers using storage facilities in the Central, the Volga, and the Urals Federal Districts. The company's target markets include structural steel factories, industrial machinery manufacturers, machining shops, construction companies, and local traders. At the same time, all other sales avenues for tubulars and rolled goods normally used by OMK, including those to third-arty distributors remain open.

"Being a major player in the regional markets for tubulars, OMK is continually improving the value offering to its customers. An in-house distribution network is one of the steps to become closer to retail customers by offering them high-quality tubulars and rolled goods from leading Russian manufacturers as well as better service. As far as that goes, we aim to be among the top ten Russian distributors", noted OMK Market General Manager Roman Rybalov.

OMK Market's network of warehouses is located in the Moscow Region, the Nizhniy Novgorod Region, Samara, Kazan, and Yekaterinburg. The central email address for OMK Market's sales function is market@omk.ru. Over 40% of the Russian demand for steel is met by the sale of tubulars, flat goods, and longs through regional distribution networks. The Russian distribution market is serviced both by players affiliated with the leading manufacturers of steel and tubulars and by large independent national networks and hundreds of smaller local players.