OMK Makes It to Top 3 Corporate Charity Donors in Russia 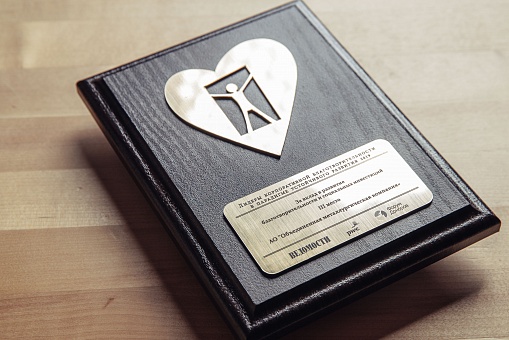 Download this photo in high resolution
The United Metallurgical Company (AO OMK, Moscow) made it to the top 3 companies that are leaders for best charity practices based on the 2018 rankings resulting from the Corporate Charity Leader Contest held annually by the Donor Forum, the PwC International Consultancy, and the Vedomosty Business Daily.

Judges and experts appreciated the consistency and the systemic nature of OMK's social policy, its commitment to the high standards of corporate social responsibility as well as the use of innovative approaches to improving the social environment in the areas of operation.

The project involved 65 Russian and international companies participating in charitable activities in Russia, including 40 placed in the rankings.

OMK was also recognized with a special award in the Best Gender Equality Program category for a program for men and women together against family violence .

The category was co-sponsored by the Council of the Eurasian Women's Forum operating under the auspices of the Russian Federal Assembly Federation Council. The project is being implemented by the Nizhniy Novgorod Crisis Center that is working with the local community with Company support. Center specialists hold interviews with school teachers, parents, and upperclassmen in Vyksa to prevent violence.

"It is of fundamental importance for OMK to weigh its business objectives against the interests of the local communities. The Company has an interest in there being an effective social infrastructure in those areas that host OMK facilities and in having our employees' and their families' living conditions be commensurate with contemporary technology and people's expectations", noted OMK Governance Board Chair Natalya Eremina.

The objective of OMK sponsorships and charitable undertakings is to develop the social and the economic potential of its areas of operations, improve the quality of life for Company employees and the local communities. In 2018, the Company invested 740,000,000 rubles into charity and sponsorship projects. Funding was granted to 90 charity initiatives from the OMK-Partnership Competition, and 42 social business projects were supported with the Start Your Own Business Program.

OMK has been named among the TOP 10 companies on multiple occasions, and has submitted corporate philanthropy programs to competitions where they were given high grades by experts and were named as winners and put up for awards in special categories.

OMK was previously recognized in the Best Grant Competition category for sponsoring the OMK Partnership competition for social and charity projects. The nomination was first instituted by Russia's Presidential Grant Foundation.

Also, OMK has been awarded a diploma for winning the category for the public transparency of charity on multiple occasions. The category was sponsored by the Agency for Social Communications.