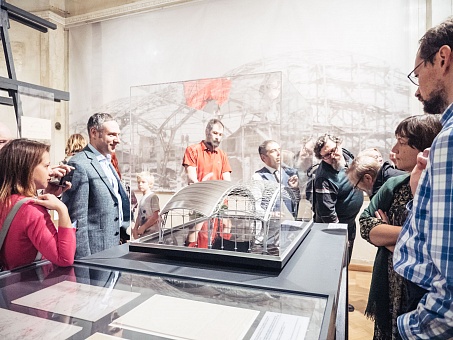 Download this photo in high resolution
Photo: visitors at the show looking at the plate shop at Vyksa Steel Works built to Vladimir Shukhov's design in 1897. The international show entitled "Shukhov: an Architectural Formula" opened today at the A. V. Shchussev National Museum of Architecture in Moscow. It is being sponsored by the United Metallurgical Company (AO OMK, Moscow). The show collected works from museums all over the world at a single site. This is the largest showing of creative works by outstanding Russian engineer Vladimir Shukhov in the past quarter century. The show includes original drawings of such steel structures as roof panels, bridges, towers, models and numerous images of structures, including photos from the Nizhniy Novgorod National Industrial and Art Show of 1896 as well as manuscripts and calculations written in Shukhov's own hand. A separate booth describes the physics behind the famous structures. Several multimedia projects are also displayed. The Vyksa Steel Works plate rolling shop constructed in 1897 became the protagonist of the section about Vladimir Shukhov's latticed support structures. This is the world's first pseudo-free double-curved convex roof. Vyksa Steel Works is also home to a 40-m hyperboloidal water tower designed by Vladimir Shukhov. "For many years, OMK has been supporting cultural, instructional, and educational projects associated with the works of the great Russian engineer. A visit to the Shukhov water tower is included in an industrial tourist itinerary through Vyksa Steel Works which is an OMK company. In addition, in 2012 the company co-published a book of photos from Vladimir Shukhov's personal archive in collaboration with the Shukhov Tower Foundation. OMK co-sponsored the publication of a research book about the engineer's works to coincide with the opening of the show. At this time, the Company is looking for a way to grant everyone access to the architectural and historical heritage left behind by Vladimir Shukhov in Vyksa", commented Advisor to the OMK Chair of the Board of Directors Alexander Kastravets when speaking about the Company's contribution to this show. BACKGROUND: In 2007, OMK held a research conference in Vyksa about Russia's industrial heritage. In 2009, Vyksa Steel Works commissioned an engineering survey of the water tower and the plate mill roof from the Nizhniy Novgorod State University of Architecture and Construction. In 2011, OMK initiated an international conference on the subject of conserving Vladimir Shukhov's heritage.