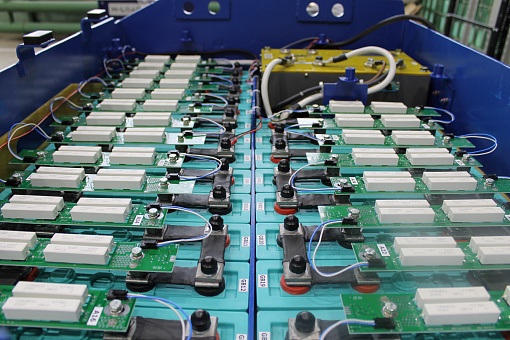 Download this photo in high resolution
A Hangcha 5-ton electric forklift at the Vyksa Steel Works (AO VSW, a United Metallurgical Company (AO OMK, Moscow) subsidiary) site has been equipped with a power storage system using Li-Ion batteries manufactured by OOO NPO Centrotech (Novouralsk Restricted-Access Municipality, a TVEL Rosatom Fuel Producer subsidiary). The enhanced-capacity power storage system for 32 kW.h is the most powerful in the entire line of similar products manufactured by NPO Centrotech. The contract with VSW was the first commercial sale. The activity was completed as part of an integrated project being undertaken by the TVEL Fuel Producer and VSW to introduce Li-Ion battery-based power storage technologies. In 2018, two pilot projects were completed already to replace acid batteries with more state-of-the-art Li-Ion ones at two of the steel works' power substations as well as to upgrade an electric forklift at VSW with power storage using a Li- Ion battery instead of an older alkaline one. "Power storage technologies are a priority business development area for the TVEL Fuel Producer with vehicle batteries, including batteries for specialized logistics vehicles, being the most promising market segment. We are prepared to select engineering parameters based on customer requirements and are also offering an integrated solution in the market: from feasibility study and design to implementing a complete product and providing after-warranty support", noted AO TVEL Vice-President for Business Development in General Industry Andrey Andrianov. NPO Centrotech Li-Ion power storage has a number of advantages with respect to lead-acid, alkaline, and gel systems. "Thanks to the new power storage, a forklift's range is increased several fold: it will not have to be sent to a special room to charge. At the same time, a full charge cycle is just over half of what it used to be. In addition, the manufacturer claims that the life of the battery itself also becomes longer, like 10 years", noted VSW Procurement Director Dmitri Denissov.