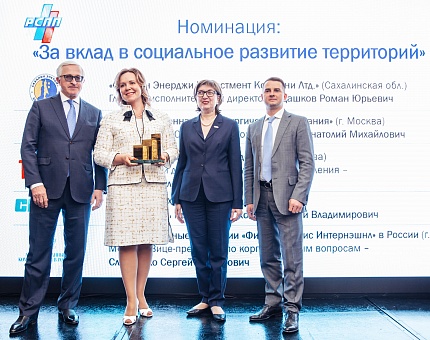 The United Metallurgical Company (AO OMK, Moscow) won a competition sponsored by the Russian Union of Industrialists and Entrepreneurs (RUIE) and entitled Russian Business Leaders: Trends, Responsibility, Stability 2018 in the category for contributors to the social development of the provinces. Participants in this category were evaluated for their accomplishments in implementing publically recognized corporate initiatives of note as well as socially minded projects and programs.

The competition's experts gave high grades for the many years of OMK's consistent and diverse efforts to develop the areas where Company facilities operate. They noted OMK's special contribution to improving the quality of life for and to developing local communities. According to the jury, OMK corporate social responsibility, support for social initiatives, corporate volunteerism, charity, cultural, and sports projects in the provinces are one of the most brilliant success stories of a large Russian company related to sustainable development objectives.

"OMK's social strategies align with the overall national development strategy for this country. We care about the living conditions of our Company's employees. Therefore, we do a lot to help them self-actualize not only at work but also outside the factory gates and change their town for the better on their own. Helping residents implement their initiatives, we promote the development of small towns making them interesting and comfortable to live in both today and in the future. In the time we have been traveling the road of corporate social responsibility, the Company has also become a reliable partner for regional governments and ministries. The award received is recognition that we are doing the right thing," commented OMK Governance Board Chair Natalya Eremina talking about the award.

Since 2015, OMK has been holding OMK-Partnership competitions for social and charity projects in cities and towns where its manufacturing facilities operate. Their participants are non-profits and company employees. The competition's grants are used to implement sustainable social initiatives. Between 2015 and 2019, OMK supported 422 projects through the competition. In 2017, an assessment of the social and economic impact of the projects implemented through the competition demonstrated that every ruble invested by OMK brought in excess of 3 rubles in social benefits.

There is another initiative, Start Your Own Business, that the Company has been running successfully since 2016. Its winners are funded by OMK to establish their own social businesses. In the years that the project has been ongoing, OMK has implemented 88 social business initiatives helping create over 190 jobs in small towns. Three business initiatives were launched by handicapped persons and helped find jobs for people with disabilities.

RUIE experts gave special emphasis to the Art-Ovrag annual urban culture festival in Vyksa (Nizhniy Novgorod Region) as the only cultural event in Russia to develop an entire town. OMK is the organizer while the OMK-Uchastiye Charity Foundation is the driver and the co-organizer. The festival helps build a dialog between businesses, the Government, and the town's residents, implements initiatives from Vyksa residents designed to create a comfortable urban environment in this small town. During this time, over 85 art objects, an art residence, a collection of street art, and the first industrial street art park in Russia at Vyksa Steel Works have been created.

The corporate volunteer program is an important tool for developing employees creatively and professionally. The Company has been running it since 2015. There are four types of volunteer initiatives that are being pursued successfully in 2017: individual volunteer projects by OMK employees, employee participation in Company-wide volunteer events together with the OMK-Uchastiye Charity Foundation, blood drives, and volunteer projects from the Councils of Young Metallurgists at the various facilities: planting trees, cleaning rivers, blood drives, helping veteran employees and care recipients in retirement homes, improving facility grounds.

Patriotic education and assisting war veterans are part of the social effort mounted by the Company. One of the very good cases in point is Victor's Gala at the Poklonnaya Hill Victory Museum in Moscow that OMK co-sponsors with the Maris Liepa Foundation and the Central Museum. In 2018, the Gala was held to celebrate 75th anniversary of complete lifting of the siege of Leningrad Over 300 veterans from Russia, other CIS countries, and the Baltic nations gathered at the Central WWII Museum at the Poklonnaya Hill in Moscow. The invitees included not only combat veterans but also veterans of the war effort, law enforcement veterans, and people that were children during the war. Delegates from 13 countries attended the Victors' Gala. Each veteran was also presented with cards from school students in all OMK’s areas of operation that children had made in special public creative classes especially for the Victors’ Gala.