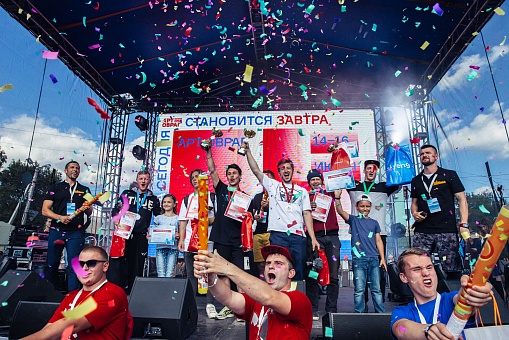 Between June 14 and 16, the United Metallurgical Company (AO OMK, Moscow) and the OMK-Uchastiye Charity Foundation co-hosted the 9th Art-Ovrag Urban Culture Festival in the Town of Vyksa, Nizhniy Novgorod Region. This year, it was focused on the motif of “When today turns into tomorrow” and covered over 10 sites in the district, including Vyksa Steel Works (AO VSW, an OMK subsidiary). Festival events were attended by some 22,000 people.

The Art-Ovrag Festival received high grades from Nizhniy Novgorod Regional Governor Gleb Nikitin. Together with Chair of the OMK Board of Directors Anatoly Sedykh and local Chief Executive Vladimir Kochetkov, he cut the ribbon on a skate park with a total area in excess of 400 square meters. The project initiated by the Governor was successfully completed in record time with VSW and OMK support.

Guests of honor also visited the “Factory of the Future” installation in Metallurg Square, the “Things that Cannot Be” show at the VSW History Museum by participants in the parallel program, and the Pavilion of the Future in the town park. Together with all the other festival attendees, they saw a premiere of an interesting dance piece entitled “OK in Imperfect Time”.

“Art-Ovrag is one of the best contemporary art and urban development events outside of Moscow. And every year, it makes more progress. It includes items that cover all the young people's interests. The festival is giving a great impetus to the development of the town itself. I think that Vyksa’s experience will be of interest throughout the region. This is also an example for the entire country of socially responsible business practices.

“Vyksa Steel Works has a very well-developed manufacturing culture. Working at a facility like this, our employees must also enjoy a comfortable urban environment and feel pride both in the fruits of their labors and their living and working circumstances. The Art-Ovrag Festival is a tool that helps us improve Vyksa’s social environment”, pointed out Chair of the OMK Board of Directors Anatoly Sedykh.

“It is very important, that today's festival was put on not only by professional artists but the town's residents themselves. In the past two years alone, over 70 Vyksa residents got involved in the parallel program with their projects. This confirms the famous motto proposed by German artist Joseph Beuys: "Everyone is an artist." Putting on the festival, we are looking to involve as many such creators responsible for their town’s future as possible”, noted OMK-Uchastiye Charity Foundation Supervisory Board Chair Irina Sedykh.

The Festival’s principal project was the inauguration of Russia's first industrial street art park at the site of Vyksa Steel Works. The park will become a unique collection of art by leading contemporary artists located at an existing industrial site. The first item was created by Moscow artist Alexey Luka specifically for the park. The plan is to add a new work of art to the facility collection every year while each mural will follow the style of an art trend prevalent in the 20th century. Previously, in 2017, the largest mural in Europe (Vyksa 10,000) was created at the site of the future park by Misha Most. While the festival was going on, anyone could take a tour of the plant and see the murals.

The town inaugurated a new work of art created from the sketches of Vyksa resident Andrey Matchin who had won the parallel program competition in 2018. The Binary Clock sculpture combines innovation with the town’s tradition metal working skill. The clock shows time and serves as a decoration at one of the town's busy intersections. It also indicates the residents’ mood: using a range of colors to broadcast the results of online opinion polls of the town’s residents.

A Pavilion of the Future opened in the town park. It had been designed by the Novoye Architectural Studio whose previous projects include items in the capital's Gorky Park and in the backyard of the Moscow Museum. This new site will host master classes, lectures, movie screenings, shows, and dance classes. With the commissioning of the upper amphitheater in July, the Pavilion will launch a new event program developed by the town's socially minded residents.

Given that this is the Year of the Theater in Russia, the festival's organizers also focused on the theatrical program. Art-Ovrag became the stage for the first showing of the OK in Imperfect Time dance performance by Theatrical Program Curator Yuri Kviatkovsky. The performance is about the evolution of the dance and a fusion of the classical and the contemporary. The attendees also saw a street performance based on “Foam of the Days”, a book by French author Boris Vian, staged by the AXE Engineering Theater that is winner of numerous awards, including the Golden Mask.

A special place on the program was reserved for a premiere of a musical performance by handicapped children based on Korney Chukovsky’s Mukha-Tsokotukha presented by the OMK-Uchastiye Charity Foundation. The park hosted a performance by the Nizhniy Novgorod Piano Theater called Wings for Clowns. Its entire troupe is made up of hearing-impaired children.

The festival’s music program featured Feduk, one of the most popular Russian hip-hop artists of a new wave, as its principal attraction. His performance at the Festival’s closing ceremony attracted thousands of Vyksa residents.

Thanks to the Vyksa:Accessible! project sponsored through the Presidential Grant Foundation, a part of the Art-Ovrag program this year was adapted for visitors with disabilities: tours with interpretation into sign language, presentation using tactile models, special tours for visitors in wheelchairs.

Art-Ovrag is Russia's only example of a culture project to develop an entire city. In the festival's 9 years, Vyksa has become home to over 85 works of street art and public objets d’art, including a light sculpture entitled “None of this is a dream” by Timofey Radia named by Forbes one of Russia’s most promising artists, and works by “Russian Banksy” Pasha 183 as well as by artists from France, Germany, the US, Hungary, Italy, Scotland.